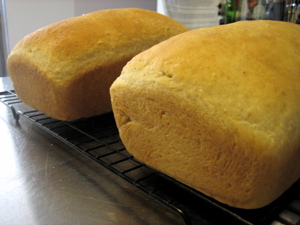 Part of my bread making marathon has been the search for a soft, tasty loaf that would be great for sandwiches. I’ve always been partial to oatmeal bread and have tried several recipes. All were good, this one is great.

I adapted the Cook’s Illustrated “Oatmeal American Loaf Bread” recipe after several tries. All were delicious, but I found the liquid to flour ratio to be off for me. I kept having to add more flour to get the dough to come together. I’ve tried using less milk instead of more flour, but have found that I prefer the whole amount of milk and add up to a cup more flour if needed. I was using All Purpose (AP) flour, which is part of the issue. I’ve tried making it with bread flour, but have found that I actually prefer the AP flour. I get a more tender and moist bread.

Note: After reading the King Arthur Flour Baker’s Companion, I realized I should not double the yeast when doubling the recipe for bread. They recommend 1 tablespoon for up to 8 loaves. The rise time may slow, but it works out better. I found this to be true, as doubling the yeast made my loaves rise too quickly causing air bubbles.