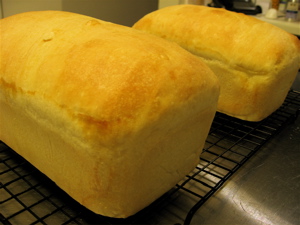 We make sandwiches for our lunch on most days. We’ve grown accustomed to homemade bread and store bought will just not do anymore. For months, I’ve been tinkering with a potato bread recipe. I based it on a recipe from the King Arthur Flour web site. I added a bit and substituted a bit until I found a recipe that works well for me each time.

The bread is light and fluffy and makes amazing toast. The butter melts into the crumb and is delightful. The following recipe will make two 8 1/2 x 4 1/2 inch loaves.

*You can certainly used mashed potato flakes, but it’s very easy to put a large, thoroughly pricked baking potato (such as an Idaho) in your microwave oven, microwave for 3 minutes, then turn over and microwave for a further 3 minutes. Let the potato cool, peel it, and mash it. This is pretty simple, and the flavor is significantly better. You can also use leftover mashed potatoes or frozen mashed potatoes that have been prepared.

Measure the water (or milk) into the bowl of a stand mixer. Stir in the dry milk, salt, yeast, egg, and melted butter. Attach the bowl to the mixer with the paddle attachment. Blend in the potato. Add the flour several cups at a time and continue mixing on low. When most of the flour is incorporated, switch to the dough hook and add the remaining flour. Cover the bowl with plastic wrap and let the bread rest or autolyse for twenty minutes. Knead on speed 2 for 6 minutes. Add more flour as needed. The dough should come away from the sides but will be sticky. After 6 minutes try the windowpane test by taking a small amount of dough and stretching it between thumb and forefinger. If it forms a “windowpane” before breaking the gluten has been developed enough and you will get a nice rise.

Scrape the dough out of the bowl into an oiled bowl or covered dough doubler. Roll the dough to cover it in oil. Let the dough rise for 1 – 1 1/2 hours until doubled.

Gently knock the dough down and turn it out onto a floured surface. Cut it in half and pat each half into an oiled loaf pan; the dough is wet enough to resist shaping. Spray tops of the loaves with oil and cover the dough and let it rise for 45 minutes to an hour.

About 15 minutes before you want to bake your bread, preheat your oven to 350°F. Brush the tops of the loaves with an egg wash. Bake the two separate loaves for 35 minutes. Turn the loaf (or loaves) out and let them cool on a rack. Yield: About 30 servings.