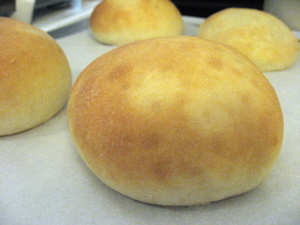 My sister invited us to an impromptu barbecue for the July 4th holiday. As the only vegetarians, she asked us to bring something we could eat because the main dish would be ribs. The vegetarian burgers we had in the freezer seemed like a good choice.

Instead of buying hamburger buns, I decided to try making them. I found a recipe in the King Arthur Flour Baker’s Companion that claimed to be the “Best”. The description read, “soft, yet vaguely sweet and golden yellow from the butter and the egg, these simple buns are perfect for burgers, but also for any kind of sandwich.” I decided to try this recipe out. I could always stop at the store if they didn’t turn out well. Also, we would be the only ones having burgers so the pressure for perfection was off. 😉

The dough came together nicely. It had a soft, supple texture. I used all-purpose flour, but I would imagine some whole wheat would work nicely as well. The book also described a method of rolling out the buns by cupping your hand around the dough and rolling it on an unfloured surface. I had to flour the table slightly or the dough stuck and wouldn’t roll. Although the dough balls were not perfect they baked into beautiful buns. My nephew was a little surprised. He said, “You MADE hamburger buns? That’s crazy.”

Crazy or not, these buns are worth the extra effort. They should freeze nicely, if you have any left. We didn’t. These have become a big hit with Dave. I have a feeling I’ll be making them often.