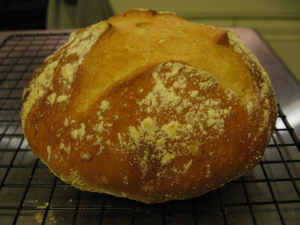 Always a day late and a dollar short, I just discovered this intriguing book. I first read about it on one of my favorite food blogs, KitchenNut. I was so curious that I went to Amazon, read all the rave reviews and placed the book in my shopping cart. However, since I just purged a dozen or so cookbooks I rarely use by donating them to the local library, I hesitated buying another book. So I moved it to my Wish List and moved on.

Later that week, Dave and I were at Bed, Bath and Beyond buying a shower curtain liner when we ran into a colleague of his from the university. C was in the baking section looking at pizza peels. He told us he had become obsessed with bread making after buying….yes, Artisan Bread Making in Five Minutes a Day. I saw this as a sign and went home and ordered the book from Amazon.

Last weekend I was able to try out this new method of bread making. The method is simple, you mix the ingredients by hand (or mixer or food processor) and let the dough rise for two hours in a covered container. You can do this in a bowl or even a plastic 6 quart container. I used one of the 6 quart square Cambro storage boxes that I use for flour. The liquid ratio is much higher than traditional recipes. No kneading at all. Each recipe will make several loaves. You cut off the amount you need and store the rest of it in the refrigerator for up to two weeks. The flavor develops the longer you store it.

Here are my observations so far:

This is the first recipe they recommend making. It’s a basic recipe with only flour, yeast, salt and water which is common for artisan bread. Dave was so intrigued that he didn’t want to wait for an overnight sit in the refrigerator. I made the first loaf shortly after the first two hour rise. The dough was very wet but I was able to form a craggy boule. I formed it on parchment paper dusted with cornmeal and baked it on the parchment on my cast iron pizza pan. I don’t have a pizza stone. I steamed it by adding hot water to pan below the bread per the book’s instructions. It rose beautifully with great oven spring and formed a lovely boule. We couldn’t wait for it to cool and ate it warm with cheese. It was good but the flavor was still a little bland.

The following day I made another loaf. It was a little better in flavor and just as pretty. The third day we had company and I made two loaves. We ate one and I gave the other one to our guests. This loaf was delicious. It was also the first time we had waited for the bread to cool. 🙂

This is very similar to the master recipe, but has a small amount of whole wheat. I used King Arthur White Whole Wheat. I’ve made one loaf so far with this recipe. It was very good. The crumb is slightly darker and it has a slightly more complex taste.

I tried this recipe as a hope for an easy substitute for our favorite Potato Bread. Sadly, there is no comparison. The dough is too slack to form a nice loaf. The method of forming a loaf is similar to a boule but you then place the dough in an oiled loaf pan. It requires at least 1 hour and 40 minute to rise which takes away from the convenience of the other methods. The dough is denser than kneaded breads and does not rise as well. The crust is crisper which is not something I’m looking for in a sandwich bread. Also, I was not crazy about the flavor. It was too sour for my tastes. Dave liked it but also prefers the Potato Bread. He suggested trying my Potato Bread recipe using this method, which I may do this weekend.

This recipe is meant for pizza and other flat breads. I altered the recipe slightly by adding two tablespoons of honey instead of one tablespoon of sugar. I also cut the salt back to a little over 1 tablespoon. I’m using Morton’s Kosher salt per the book’s suggestion, but have found the loaves a little salty for my taste. The authors suggest using less or more to taste.

I mixed up a batch of the dough on Wednesday night to make pizza on Thursday night. This was a huge hit. I had tasty pizza on the table within 40 minutes. I took a hunk of the dough out of the container when we got home and formed a boule on cornmeal dusted parchment paper. I let it rest for about 10 minutes while I preheated the oven and got the other ingredients together. After about 20 minutes of preheating the oven I slid the pizza into the oven on the parchment. It baked up in 20 minutes. The crust was crisp and the bread had a nice airy crumb. The flavor was fantastic. Using the parchment paper insured it did not stick to either the peel or the pan. Clean up was a breeze.

Well, I haven’t really concluded anything. It’s an amazing method for certain types of bread. I think I prefer a more traditional method for sandwich breads. I’ll continue to experiment with the method as it is a lot of fun and requires little equipment. There are some sweet breads that I want to try as well.

It’s a great method for novice bread bakers who are afraid to try making homemade bread. I’m not quite a novice anymore, but I still have my training wheels and am excited to try new techniques. It’s also quick and easy.

This is a great book. I’d highly recommend it. The authors, Zoe Francois and Jeff Hertzberg, are active on many cooking bulletin boards and answer many questions. Zoe Francois is a professional chef and has her own blog, Zoe Bakes. The book also has a website where you can contact the authors and read updates and corrections in the book.