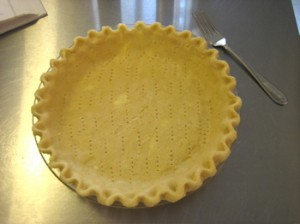 Growing up, my idea of making a pie was to buy a Mrs. Smith’s frozen pie from the grocery store and put it in the oven. I didn’t even do that well. My first pumpkin pie was blackened and burnt on the top.

My best friend’s mom made the most wonderful apple pie from scratch and she showed me how to core and peel the apples and make an oil and flour crust. It was thin, light and flaky.

My future mother-in-law showed me how to make a thicker pie crust using shortening. This was the perfect vehicle for pumpkin pie. I still use her recipe for the custard filling to this day. However, my crust using her recipe was never quite as good as hers, so the search continued.

Two Thanksgivings ago, I used the Cook’s Illustrated butter/shortening crust recipe. This was very tasty, but it was hard to make in the food processor as the butter clumped terribly. It seemed to be too much fat for the flour or the food processor was just too powerful. This past Thanksgiving, I tried a variation of Alton Brown’s pie crust substituting shortening for the lard. It was good, but not as good as the CI recipe. However his technique of adding the water with a spray bottle and putting the dough in a gallon sized zip-top bag to chill and roll was ingenious.

This weekend I made a Vegetarian Shepherd’s Pie in honor of St. Patrick’s day. I tried a new crust recipe out of the King Arthur baking book but used my KitchenAid mixer and the wire whip to cut the fat into the flour. This was truly a success. Not only was it easier than using a food processor it was also less clean up. The pie dough came together perfectly. I then put it in the zip-top bag and chilled until I was ready to roll it out. The great part about using the bag, is you snip off the edges and and roll the dough inside the bag. It works well and clean up is a breeze.

Oh, and the pie crust was delicious. I ended up using real buttermilk, since I had some in the fridge, but didn’t have buttermilk powder. I also didn’t have any vinegar so left that out. The crust was flavorful and flaky, just perfect for the pie.

Mixing the dough
Place the flour, salt, buttermilk powder and baking powder in the bowl of your standing mixer. (Note, you can also use 1 tablespoon of buttermilk, but add this to the liquids and cut back water by 1 tablespoon.) Attach bowl and whisk attachment to mixer and mix on speed 2 for 30 seconds to combine dry ingredients. Cut cold butter and cold shortening into 1/2 inch cubes.

Add butter and shortening bit by bit to flour mixture and mix at speed 6 until fat is cut into the flour and resembles small peas. Combine vinegar and water. Turn down the mixer to speed 4 and slowly add the liquids until dough just comes together. You may not need all the liquid. The dough will clump inside the wire whisk and will form a ball when squeezed by hand. Stop the mixer and remove bowl and attachment.

Gather the dough and place in a gallon sized zip-top back. Form the dough into a flat disk. Seal the bag and place in the refrigerator for at least 30 minutes.

Rolling the Dough
Remove the dough from the refrigerator. Cut off the top and sides of the zip top bag. Using a rolling pin roll out the dough inside the bag to the edges. Rotate the bag a 1/4 turn each roll to get a nice circle. Peel back one side of the plastic and ease the dough into your pie pan. Remove the second side of plastic and gently press the dough into the bottom and sides. Using a fork poke holes in the bottom and sides to let steam escape. Fold over any excess dough and crimp the edges. If you have a short side, use extra dough from another side to piece together the crust. 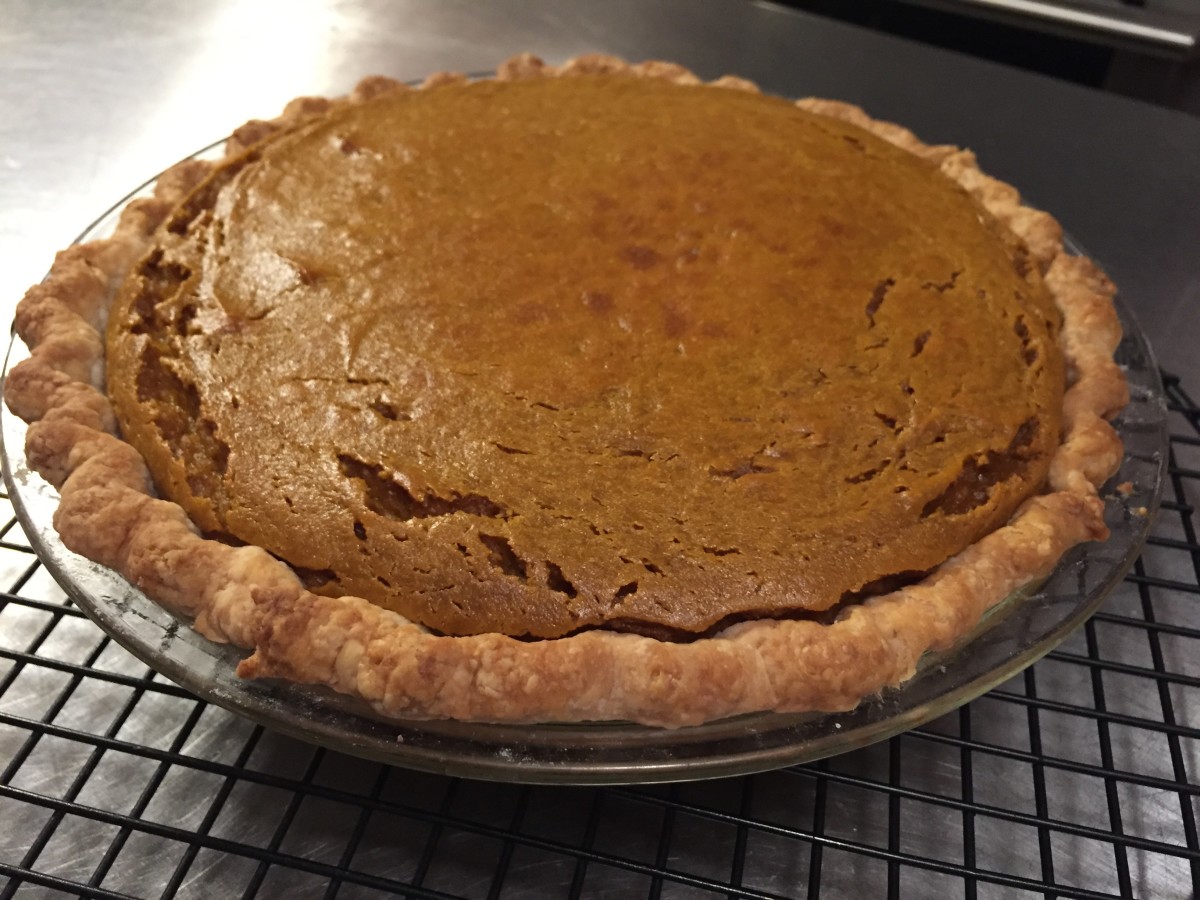 I’ve finally found a fantastic recipe for vegan pumpkin pie. Not only is it delicious, but easy to make with only four ingredients that I always have in the pantry. 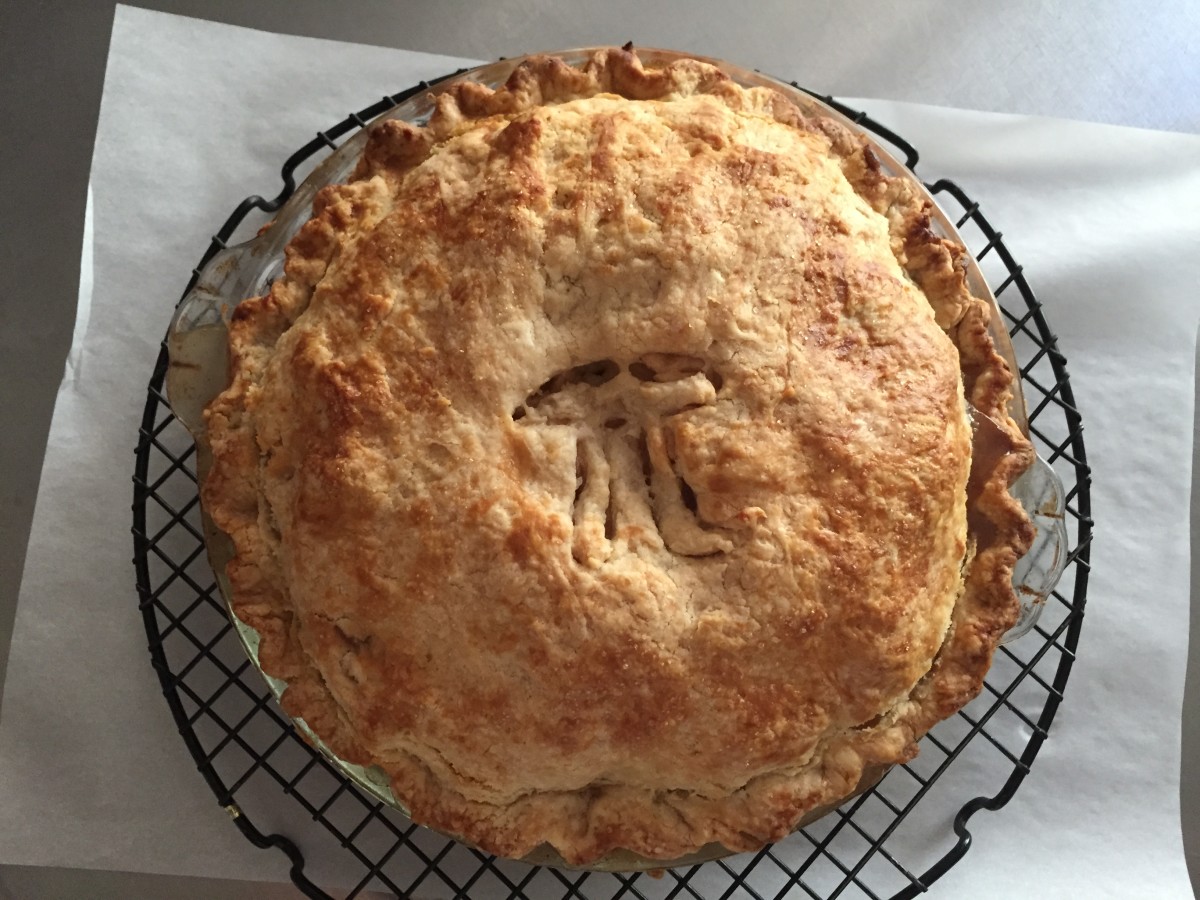 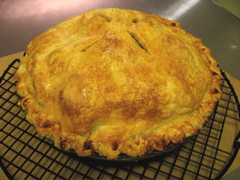 Last week I was talking to my neighbor, Jim. He's a wonderful neighbor, we couldn't wish for more. I was in the process of pruning the rose bushes in front of our place and wanted to know if he would like me prune his as...