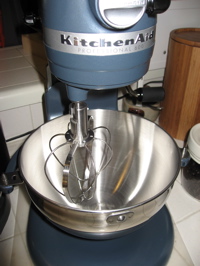 Hi, my name is Sylvia and I have a kitchen gadget obsession. I know I’m not alone. Stores like Williams Sonoma, Sur La Table, Crate and Barrel, not to mention Amazon.com love us. Where some people buy shoes, we buy kitchen ware: appliances, cookware, bakeware, tools, etc.

Some gadgets get used frequently and I wonder how I got by before they graced my kitchen. Other things seemed like a good idea at the time, but gather dust and get moved around until the next garage sale or eBay auction.

I have a KitchenAid Professional 600 mixer, Stella. (My third KA Mixer, all worked beautifully, I just ‘had to’ upgrade. 🙂 ) I love Stella and use her several times per week. She stays on the counter ready for action. She’s a big mixer with a large 6 quart bowl. However, sometimes you don’t need a bowl that big and it can actually be a hindrance.

KitchenAid came to the rescue by introducing a 3 Quart Bowl and Combi-whip in March of last year. (Yes, I did rush out and buy it last March.) This smaller bowl ingeniously attaches to 5 quart and 6 quart models that use the bowl lift mechanism. Currently, it is a Williams-Sonoma exclusive.
[ CORRECTION: It is now also available directly from KitchenAid. ]

Is the smaller bowl and whip a necessity? No, I got by quite well without them. However, having a second, smaller bowl is a nice convenience. The small bowl nests well, so it’s easy to store. That is half the battle in my small kitchen. The 3 quart bowl will nest in the 6 quart bowl, but I use the big bowl to store the attachments including the dough hook, the paddle, and the combi-whip. The wire whip is too big and gets stored in a cupboard. I have some of the KitchenAid bowl covers to keep the attachments and bowl clean. I nest the 3 quart bowl with some bowl shaped strainers.

So far, I mainly use the 3 quart bowl and whip for making pie crust and making buttercream frosting. It does an excellent job of cutting butter into flour. It also mixes buttercream well and is little easier to scrape down. So, while not a necessity, this bowl and whip are keepers.