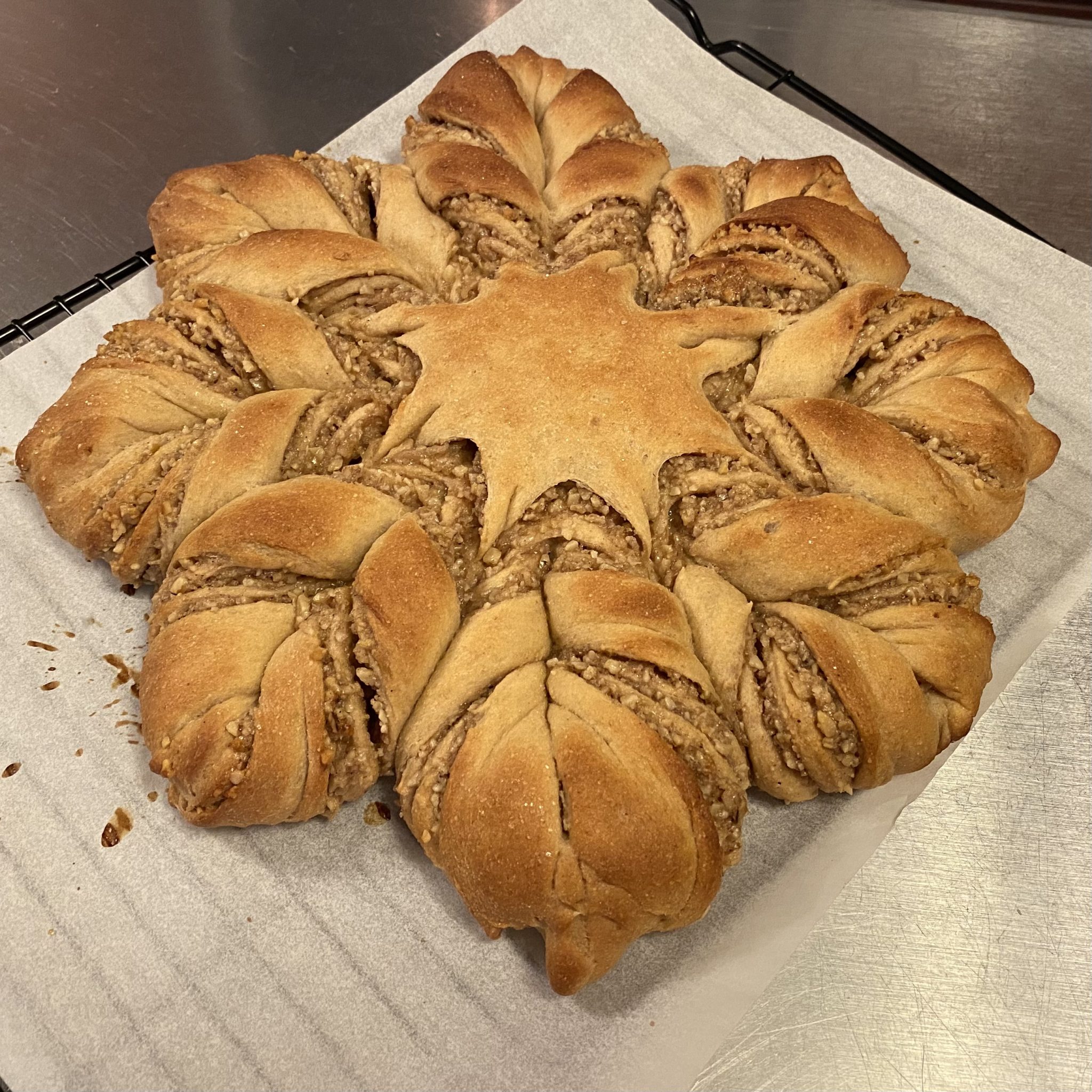 Nut rolls are a popular holiday recipe throughout Eastern Europe. This article from Spruce Eats describes the different names and history behind this delicious bread. I had it every Christmas at my best friend’s house. Her grandmother made it and called it orehnjaca. She had learned the recipe from her mother-in-law who was Croation.

The past few years I have tinkered with the recipe to make it vegan. This hybrid version may not be authentic, but it is delicious, more nutritious with whole grain flour, and vegan too!

For the bread, I am using the basic roll recipe from “The Essential Home Ground Flour Book”. I mill the flour with my KoMo grain mill using organic hard white wheat berries. The nut filling is traditional, albeit vegan. The star bread method is from King Arthur Flour’s Cinnamon Star Bread recipe.

Make the dough using the basic roll recipe. (See below). This recipe makes delicious rolls, too. I’ve never made it with commercial flour, but you may be able to use whole wheat flour. I like to use organic hard white wheat berries, as the flour is a little more mild than regular whole wheat flour which is usually made with hard red wheat. King Arthur does make a Hard White Wheat flour, which should be readily available.

Make the dough up to step 3 and then follow the steps to make the filling and then to Star Bread Method.

These rolls are lightly sweet and reminiscent of King’s Hawaiian rolls. I like to use freshly milled organic hard white wheat.
Print Recipe
Servings 16 rolls

While the dough is rising, make the nut filling. This recipe uses grated apple. Don’t leave it out. It can be too dry without the apple. You may be able to substitute apple sauce, perhaps 1/4 cup. Let the filling cool completely. It can be made ahead of time and refrigerated. I use walnuts which is traditional, but you may be able to use pecans instead.

This recipe is delicious any way it is shaped, but the star bread method is easy and quite festive. It will be a showstopper at any gathering.

Divide the dough in 4 equal pieces. Using a scale for this works well. Cover the dough balls and let rest for 15 minutes.

Roll the first piece of dough into a 10” circle. Place on a parchment lined baking sheet. Spread 1/3 of the nut filling on the rolled out dough. Go up to 1/4” of the edge.

Roll the second piece of dough into a 10” circle. Place on top of the first layer. Stretch the dough to match the first circle. They don’t have to be perfect. Spread another 1/3 of the nut filling on the second layer. Repeat with a third circle of dough and the last 1/3 of the filling. Roll out the last circle and place on top.

Using a glass or biscuit cutter, indent a 3” circle in the middle of the top layer. Using a bench knife or straight edge, score 16 even spokes around the circle. I start with 4 even marks, halve those to 8, then halve those to 16. Cut along the scored lines, careful not to cut into the circle in the middle. I like to use clean kitchen shears, but you can use a paring knife or bench knife.

Take two pieces and twist towards the outside 2 times. Pinch the ends of the dough together. See the photos on the King Arthur recipe to help visualize this. It seems difficult until you try it.

Continue with the rest of the pieces until you have 8 spokes. Cover and let rise for 30 – 45 minutes. Preheat the oven to 350ºF while the dough rises.

Let it cool for 15 – 20 minutes and enjoy! You can reheat leftovers if there are any left. 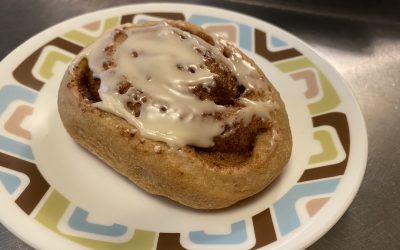 Starting out the new year with a vegan cinnamon roll recipe using the tangzhong method.