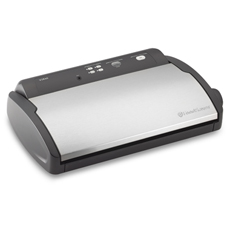 Our refrigerator is about 13 years old. It’s a not-so-lovely beige Maytag which still works fairly well. My two complaints are 1) that it’s kind of ugly and outdated and 2) that the freezer seems to have a temperature fluctuation causing freezer burn to happen rapidly. We end up throwing out a lot of food due to large amount of ice crystals that form inside the containers.

It really is time for a new refrigerator, but with a kitchen remodel in the not too distant future we have waited. Both of my sisters swear by FoodSaver vacuum sealers. I have found that things that come pre-sealed this way do survive our freezer rather well. A few months ago, I researched vacuum sealers and people rave about the FoodSaver brand, so I decided to give it a try.

Costco had a nice version that included some canisters for about $135. Bed Bath & Beyond had one with a flip up design for $160. This one was chrome and black instead of white. I have very limited counter space and I knew that if it was put away I would rarely use it. I opted for the BB&B version and used a 20% Off Coupon which brought it to $128. I didn’t get the extra canisters, but I had a more usable appliance.

The bags and rolls for the FoodSaver are kind of expensive, but you can reuse them if you don’t store meat in them. Since we’re vegetarians, that’s not a problem. Costco does have a 6 roll box for $40. I bought that and still have a lot left. My best guess is that it will last me for about 6 months.

I love using it because now I can vacuum seal left overs or food I buy in bulk, including flour. We love buying the 1 pound block of Tilamook cheddar cheese at Costco. Sometimes it molds before we can eat it all. It’s a lot of cheese for two people. Now I portion the cheese into manageable pieces and vacuum seal the extra. When I made the Shepherd’s Pie this weekend, I already had most of the ingredients in the freezer sealed away for future use. This included a wonderful vegetarian gravy I made that would have gone to waste.

I’m not sure if it’s saving me all the money I’ve spent on it and the supplies, but if we count not eating out as often, we’ve saved tenfold. Besides, my husband really hates wasting food. When he found out this would help with waste, he was happy to indulge my gadget fetish.

I’ve only used the bags and rolls so far. I may get some of the canisters to see how they work in the future. This is one gadget that has lived up to the hype.